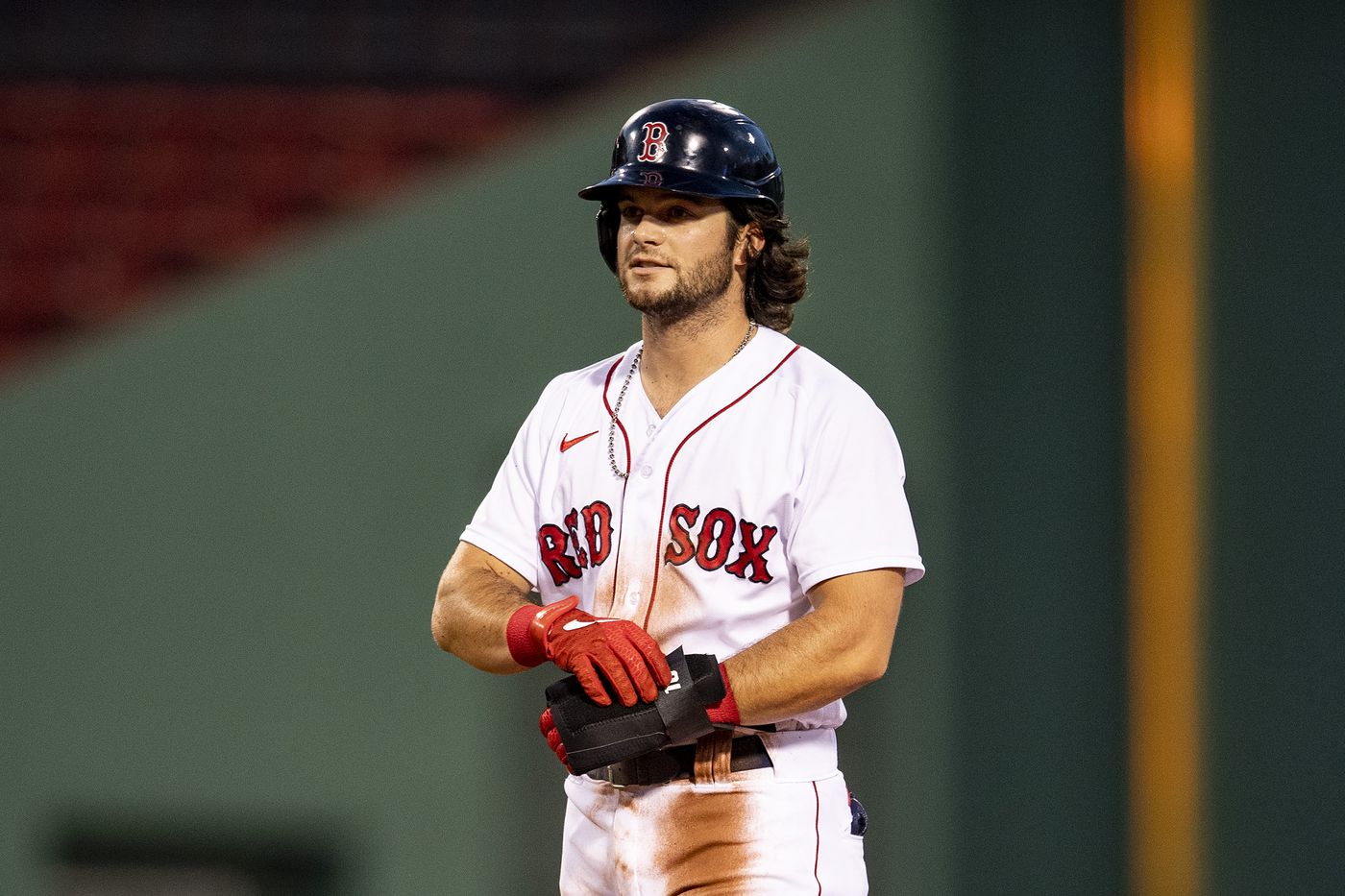 The Andrew Benintendi era in Boston came to an end Wednesday night. When the Red Sox traded their homegrown outfielder to the Kansas City Royals.

Benintendi was sent to Kansas City in a three-team deal that brought outfielder Franchy Cordero. Two players to be name to Boston via the Royals, plus right-hander Josh Winkowski and a player to be name from the New York Mets.

Trade rumors have surrounded Benintendi since the start of the offseason, so the move wasn't necessarily a surprise to the 26-year-old. He shared his reaction to his Red Sox departure on Thursday.

"I tried not to pay too much attention to it because there's only so much I can control," Benintendi told reporters. "I got a call last night from Chaim Bloom and [he] said that 'there's a good chance you're going to get traded tonight so I'll let you know.' Didn't know the team, and then I found out it's the Royals, and I'm extremely excited."

Benintendi helped the Red Sox to a World Series championship in 2018. Most notably making an unforgettable game-saving catch in Game 4 of the ALCS vs. the Houston Astros.

While the end of his tenure in Boston was a disappointment.
It wouldn't be a surprise to see a bounce-back season out of Benintendi in 2021. 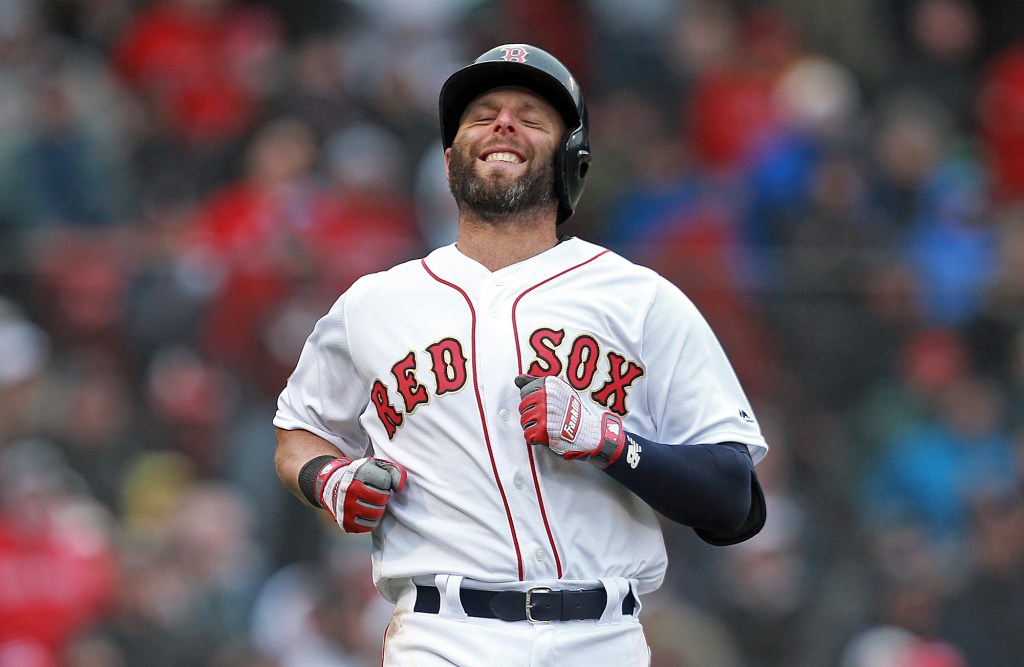 Maybe, the first time you saw him, and then only for a few minutes, a few swings, Dustin Pedroia was a victim of his surroundings. Of your perspective.

His head tilted back, his chin leading, all tough guy, asking for your best shot. His eyes cinders, shoulders puffed out, legs bowed. Cheeks smeared black. Carrying what looked like a damn steering oar and walking like he best not be messed with.

By himself, this dude was mighty. He was Herculean.

Then, because he’d have to go stand next to a catcher, a first baseman, an umpire, maybe a batboy, there emerged the real Dustin Pedroia. Maybe 5-foot-9. Maybe a buck-seventy. So, that first time you saw him, you didn’t get him at all UFA.

And after a little more time, after a second look, you thought, “This dude is mighty. He is Herculean.”

He retired Monday after 14 seasons with the Boston Red Sox, at 37 years old.  Hardly played the past three years because left the working parts of his knee in some dirt around some second base. Two-time World Series winner, an MVP and a Rookie of the Year, a .299 hitter with 140 home runs who in more than 1,500 games struck out 30 more times than he walked.

That’s too many numbers, though, all pushed together in one paragraph, so you could barely see the real Dustin Pedroia in there.

The guy who walked into Pat Murphy’s office at Arizona State for the first time wearing a tight, white tank top, drew his arms into a dramatic flex and announced, “How you like these guns, bro?”

Murphy looked at this kid who hadn’t yet eaten himself to 150 pounds, at the arms so pale and undeserving of a tight white tank top, and said, “Can you pick up a ground ball?”

Almost 20 years ago now. After the All-American teams. Eighteen-hundred-and-some big-league hits ago. Four All-Star games ago.

Murphy, who could be a bit blustery himself, watched the act for a while, considered all that drove Pedroia.  How he played and the influence he was having on the program and one day told him, “Double down on that, Dustin.”

“He walked around like he was the best shortstop in the country,” Murphy said. “And soon he was.”

On Monday afternoon Pedroia sat in front of a computer so he could say he wasn’t going to be playing baseball anymore. His body wouldn’t have it. He said he was OK with that. Occasionally he dabbed at his eyes. His beard had a dusting of gray. Behind him, over his left shoulder, netting hung from the ceiling, his batting cage, built to replicate the one at Fenway Park.

He said he’s going to raise his three children from home, the way his parents raised him. He’s going to be a coach on the baseball fields and a rebounder in the driveway and, for as long as he can, and depending on how much harder the math got, a tutor at the kitchen table.

“That Arizona State education,” he said with a grin, “I need to talk to somebody about that.”

Sam Kennedy, Red Sox president, told the story of the team drafting Pedroia in the second round in 2004, its first pick. Then-general manager Theo Epstein calling their new player with the news. Pedroia picked up and Epstein introduced himself.

“Bro,” Pedroia said, “sixty-fifth? What took you so friggin’ long?”

So was born a relationship of player and team and town that was both rare and could only be. They went to six Octobers together, rode duck boats, lost some and won a lot. They showed up early and played hard and drank beer and together, almost always, amounted to a little more than they should have.

A manager’s most difficult job is to find nine guys on a roster who want to play. Want to play hard — just about every day for six, maybe seven, months. Dustin Pedroia was in his uniform by 5:30 every night. And when teammates gave him a hard time. he’d smile and say, “Hey, you never know if the game is going to start early, right?”

“I thought I was passionate,” said Alex Cora, who played alongside Pedroia and then managed him. “I thought I loved the game more than anybody else. He beat me to the spot.”

Dustin Pedroia will go on loving the game, only now from further away and with a scar that runs, by his estimate. “From my shin all the way up to my quad.” He’ll love his kids’ baseball and whatever else they love.

He’ll probably remember the big hits and the bigger moments. But more often the teammates and the friends and the dark nights at Fenway when they all stood in there together. When they would be measured not by how tall or how heavy or how imposing, but who they stood with.

“I never took one play off, from Little League on,” he said. “And then at some point you can’t play anymore. And this is the time.”

They stood with him. With Dustin Pedroia, mighty, Herculean.